Every Picture Tells A Story: Thirty stunning photographs that capture life from every corner of our globe were shortlisted for this year’s prestigious Isle of Wight photography award.

Island photographer Victor Saltmeris was announced last night as this year’s winner of the coveted IWPOY prize for his image ‘Young and in Love’. Second place was awarded to Keith Towers for ‘A Quiet Space’ and third place ‘Cleaning up after a long day’ went to Ian Johnston.

The IWPOY Awards is an annual competition and exhibition organised by the Isle of Wight Digital Imaging Group (IWDIG) which gives Island Photographers the opportunity to demonstrate their creativity and talent behind the lens. 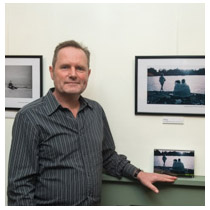 Victor (pictured) was presented with his award during the IWPOY Awards ceremony at Dimbola Museum and Galleries, Freshwater for his poignant image: ‘Young and in Love’  He also received an Olympus Digital Camera, a solo exhibition of his work in the Autumn and a years hon membership of the IWDIG, topped off with a stunning Acrylic Trophy.

This years theme ‘Every Picture Tells A Story’ was chosen to allow entrants, of all ages and abilities, to submit any image taken during 2013 that had ‘impact’, whether landscape, seascape, action, people, macros or any other subject.

The contest attracted more than 351 entries from 157 photographers and was judged by David Betts, one of the Islands foremost professional photographers, Christian Warren, Style of Wight Editor and Rachael Flynn, Exhibitions & Collections Co-ordinator at Dimbola Museum & Galleries.   During the evening the shortlisted photographers were presented with their certificates and the shortlisted images will be exhibited at Dimbola in the Olympus Gallery from January 11th until 30th March 2014. 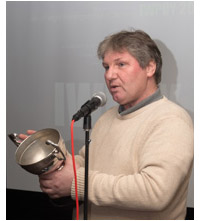 As was befitting the location, John Evans gave a short but comprehensive talk on the life of pioneering photographer Julia Margaret Cameron.

The Julia Margaret Cameron Trophy awarded for services to the island photographic community was this year presented to Dimbola Administrator John Holsburt (pictured) by former award recipient Bob Aylott.   This award is given to a notable person who has contributed over a significant period of time to the art of photography by encouraging and assisting photographers along that journey on the Island.  Previous recipients of The IWPOY Julia Margaret Cameron Award are: Amanda Johnson, Eric Mitchell and Bob Aylott.

‘Moody London’ by youngest entrant Beth Crockford (pictured), a tethered dog ‘ I Hate Shopping!’ (John Heelan), a man painting a house in a vivid yellow colour  ‘Heritage Painter’ (Paul Lucas) and capturing ‘Snow Ritual’ in the Alps (Terry Smith) are just some of the stunning images taken across the globe by Island Photographers and submitted to the prestigious IWPOY photography awards this year.

From brilliant shots of nature ‘Bonding’ (Andy Hale) and ‘Berries For Breakfast’ (Barbara Close) to lifestyle portraits ‘The Reach’ (Chris Cornford) and ‘Taking In The View’ (Karen Lynch), amateur and professional photographers provided some of their very best work in the hope of winning the coveted 2013 Isle of Wight Photographer of the Year title.

The organisers would like to take this opportunity thank everyone both in front and backstage for helping to make IWPOY 2013 such a great success. We would also like to extend our congratulations to Victor Saltmeris, Keith Towers and Ian Johnson for their respective fist, second and third winning entries.

All of this year’s winners and shortlisted entrants are also invited to second viewing on Friday 17th January between 6:00 – 8:00pm, where we will be announcing the theme for the 2014 competition and hope to meet with some of you again during the evening.