A special thank you is due  to Chris Packham for agreeing to be a judge for the 2009 IWPOY and ‘Go Wild on Wight’ competitions. We are very excited to have Chris onboard  and know that his knowledge and skills as a photographer will be a great asset. 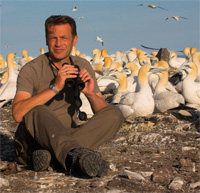 Chris was born in Southampton in 1961 and as soon as he was crawling around suburbia Ladybirds were being desiccated in matchboxes and tadpoles tortured in jam jars. Husbandry skills improved and the menagerie expanded to large collections of reptiles (inside) and birds of prey, foxes, badgers, squirrels etc (generally outside). A precocious young scientist, swot and nerd in training he studied Kestrels, Shrews and Badgers in his teens and undergraduate days at the Zoology department of Southampton University. He also embraced Punk Rock and played in a band and the DIY ethos and determination to never take ‘no’ for an answer are forcefully retained. 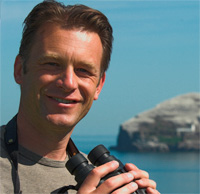 Post graduation and a cancelled PhD, (the Badgers were getting a bit much), he began taking still photographs and trained as a wildlife film cameraman. The photography continues with exhibitions and invitations to judge prestigious competitions but the camerawork gave way to presenting. Chris began with the award winning Really Wild Show in 1986 and has been working ever since. Credits include, Wildshots, Wild watch, Go Wild, basically lots of things with ‘wild’ in the title. X-Creatures, Postcards from the Wild, Hands on Nature, Natures Calendar, Nature of Britain and most recently BBC 2 Springwatch. At the turn of the century Chris ran a hugely successful production company ‘Head over Heels‘ making programmes for Animal Planet, National Geographic, ITV and the BBC .

Chris has had the good fortune to travel widely and he has explored many habitats from Antarctic Islands, rainforests, deserts, the Everest range, the deep oceans and some of the planets most notorious nightclubs and drinking dens. He is a sucker for Archaeology and likes to holiday amongst ruins.

He has the honour of being a pro-active president, vice president and patron of some notable conservation charities and regularly expounds his entertaining, pragmatic and enthusiastic, occasionally controversial view, on the environment and its care.

He has a couple of old cars which don’t get much exercise, a couple of dogs who cant get enough exercise, has no fondness for unnecessary exercise himself but reads and writes continuously. He dabbles in the art market and wishes he had a Miro. His top-ten favourite birds has a hundred in the list, he wants to see a Philippines Eagle before he dies and thinks Audrey Hepburn has no known earthly equal . He cannot sing and cannot dance.