It is with great pleasure that we are now able to announce the first, second and third place winners of the 2nd Isle of Wight Photographer of the Year competition. Along with these winning images all of the fifty shortlisted entries will be exhibited in both the Quay Arts and Dimbola Lodge in 2008 so everyone will be able to enjoy the quality and recognise the skills of our Island photographers.

On Saturday 1st December 2007 the Quay Arts opened its doors for a drinks reception prior to the 2nd IWPOY Awards Ceremony. The room was buzzing with anticipation as the short-listed photographers and invited guests mingled and chatted.  Promptly at 7:15 everyone made their way into the theatre for the start of the ceremony…

This annual event is hosted by the Isle of Wight Digital Imaging Group (IWDIG) and professional photographer Gary Early, one of the the group’s founder members,  gave an introduction about the competition’s aims and achievements, digital imaging today and recognised the sponsors for their support. It was then the turn of the fabulous Dimbola-Duo of Brian Hinton M.B.E and David White to keep everyone enthralled with their presentation about Dimbola’s newly acquired ‘Nellie Mundy’ album and the work of Julia Margaret Cameron. Brian kept the audience amused with his impersonation of childred hiding from JMC’s camera and once again their talk was both facinating and entertaining.

It was then the turn of David White, Dimbola’s ‘photographer in residence’ to take center stage to announce the first ever award presented by Dimbola Lodge, the Julia Margaret Cameron Photographic Award. David explained that this will be an annual award presented  to the person who has done the most for photography on the Island during the preceeding year and that this award is not necessarily for the best photographer but will be awarded for services to the photographic community. 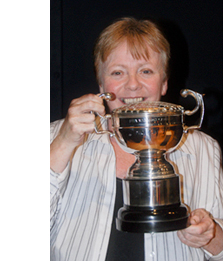 David further went on to explain that he hoped that this award would encourage other Island photographers and the other camera clubs on the Island to support the IWPOY and Dimbola to strengthen the Island’s photographic community.

He then presented the first Julia Margaret Cameron Photographic Award to Amanda Johnson from the IWDIG. The IWPOY competition was her original idea and as well as setting it up her role is to administer the competition and an online photographic forum.  A semi-professional photographer herself Amanda is also heavily involved in promoting photography through her own news website Island Pulse. Everyone agreed that the award was well deserved and all were impressed by the enthusiastic support that Dimbola has for the IWPOY and photography on the Island.

After a short break the the 2006 IWPOY winner, Kevin Mitchell, gave a short talk on what winning the 2006 Photographer of the Year award had meant to him.  Kevin’s talk was encouraging to all Island photographers and he explained how his photography had progessed through his involvement with the IWDIG over the past year.

The photographers who took the fifty short-listed images were then presented with their exhibition certificates by Alan Marriott, Editor of the Isle of Wight County Press. By this time the announcement of the top three winners was rapidly approaching and it was great to see Island MP Andrew Turner step up to present the certificates and the canvas prints to the successful photographers. Alan Marriott presented the final award of ‘a day with an Isle of Wight County Press Photgrapher’ to the overall winner, Neil Hunt for his winning image ‘St Catherine’s Lighthouse’.

Congratulations to the winners and all photographers who made the short-list. A special thank you is also due to the IWPOY sponsors and all involved in staging the event. We are already receiving offers of increased sponsorship for 2008 and looking forward to viewing the exhibitions and seeing all of the new images for next year.